Click on over to by pal Ashley J. Barnard's blog today, she's the Reluctant Blogger.  It was her turn to ask me some questions, which is only fair since she was in my hot seat last Friday.  So stop by, HERE and find out a bit more about my Lancaster trilogy...and me, of course.
Posted by TK Toppin at 4/15/2011 08:20:00 am No comments:

Recently, I read fellow Champagne Books writer, Ashley J. Barnard's fantasy book, Shadow Fox, and got myself hooked into a whole other place.  Not only were her characters lives exciting and interesting enough to follow like a soap opera (with nail-biting cliff hangers and all), the imagination and the in depth detail that went into the creation of the story was obvious enough to see.  After asking some nosy questions, I now understand that this story is something quite close to Ashley's heart, having been gestated with loving care for many years.  No wonder it has the ability to pull you into the story like her magical portal that opens up to take you into the 'other place'.
TKT: Okay, let’s start with the usual stuff, like, how, why, and what inspired you to be a writer.
AB: As a child I invented a fantasy world that was inhabited by foxes. Every single moment I could get away with it, I would devise soap-opera type plots for my characters, whom I would either pretend to be or watch in my imagination. As I got older the foxes morphed into people, and the plotlines matured and deepened. Writing seemed like a natural extension of this, and I discovered how much I enjoyed writing in 6th grade. Our teacher assigned the writing of a “novel.” It was the first time I ever showed any interest in an assignment, and the first time I received an A, must less an A+. I was hooked from then on. 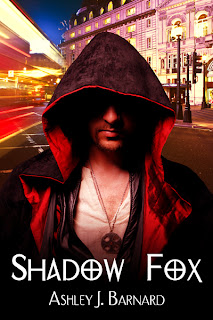 TKT: Shadow Fox is your first published book, but at the end of the book, it says you’ve written seven.  I’m being nosy…can you tell us a little bit about them?  I’m guessing two of them are the subsequent sequels to Shadow Fox?
AB:  Be as nosy as you like! I have one historical fiction, one mainstream and another stand-alone fantasy (all of which are being shopped around by my agent). And there are actually three sequels to Shadow Fox. The fourth installment is in dire need of a rewrite, and before I take the plunge, I am waiting to see how well the first three do. There is plenty of closure at the end of book three if I decide not to continue; however, there is also a tiny opening for another installment if I want to plunge ahead. 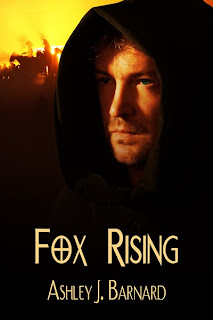 The sequel - just released
by Champagne Books
TKT: It’s quite obvious you’re into medieval arts and weaponry, what got you into all that?  And are you kinda scary to meet up on a dark alley?
AB:  Unfortunately, I am a terrible wuss. I do know the rudiments of rapier and dagger as my husband and I used to do demonstrations in our theatre days, but I think I would run and hide in a real altercation. We have an awesome collection of weapons though, using again our theatre as an excuse to buy rapiers, daggers, shields, halberds, bucklers and quarterstaffs. I loved reading fantasy when I was young, and have always felt a strong resonance for anything medieval or Renaissance...y.
TKT: How did you come up with the story?  I mean, fantasy-wise, there’s been so many different stories about time-travelling, alternate worlds, portals and gateways, secret passageways, etc, yet you’ve managed to keep a die-hard favourite fresh and simple, like as if it were any normal thing.
AB:  Oh, thanks for that! I started off with a king and queen story, with a princess (all foxes). I was five years old, and my parents were getting a divorce. So my foxy king and queen also divorced, and the poor princess was confused, angry, depressed. When I was 11 or 12, I started playing with the idea of this rebel fox who was getting in trouble at school. I think I decided this poor fox would have to carry all of my angst and pain, because I threw everything but the kitchen sink at him. I gave him an insane father, whose insanity was genetic, and the fox boy got into trouble with the law, drinking, etc. One day I decided to merge the two storylines. Confused, lonely princess falls in love with rebellious, troublesome outcast. Chaos ensues. But I was obsessed with the story, and when puberty hit, the foxes were gone, replaced by people. And yes, this was motivated by sex. I don’t remember at what point I added a gateway and alternate dimension, but suspect it was just a device for narrative logic.
Wow. That got kind of heavy. I should pay you for therapy!
TKT: Nah…writing is therapy enough.  Make yourself richer, not a therapist.  But this will explain all your foxy images and the use of ‘Fox’ in your title(s).  On to my next question…  Your book is filled with fighting and swordplay and all those wonderful action-packed moments.  When you’re writing, do you find yourself acting out the fight sequences?  Physically, I mean?  (I find I do, from a seated position with the hand movements, etc…I know, it’s funny to see.)
AB: I bet you look adorable when you’re acting out your fight scenes. : ) I don’t act mine out, but I do spend a lot of time imagining it beforehand. Then I replay it again and describe what I’m seeing from the film reel in my head.
TKT: When you’re not writing, and not daydreaming, what do you do in the real world?
AB: Alas, nothing so romantic. I do insurance transcription – I listen to the recorded statements adjusters take from people who were victims of car accidents, theft, fire, etc., and type every word. It’s made me a terribly paranoid driver. I also have a seven-year-old daughter who is as obsessed with ponies as I was with foxes, and she keeps me delightedly busy.
TKT: I’ve read Shadow Fox and I loved it.  As I said, it was a fresh take on the whole ‘other world’ thing, but that aside, you managed to create some memorable characters.  Obviously, as the trilogy continues, Jared and Tarika will be featured again.  I’m hoping here.  So, can you tell us a little bit about the sequel, Fox Rising?  Any new characters appearing?
AB: Fox Rising literally picks up in the very second where Shadow Fox leaves off. Because we’re in a new world, there are many, many new characters: soldiers, royalty, a few elves. Jared and Tarika remain at the center of it, and Nathaniel becomes a much more central character as well. There’s a couple of wars, a lot of sex, betrayals and murders. You know, all that good stuff.
TKT: Hmm, you know, I always wondered about Nathaniel.  Okay, so if you fell into your own books and could be any one of the characters, male or female, which would you be?  And, who is your favourite character and why?
AB: Aw, man, that’s like asking a parent who their favourite kid is! I’ve always wanted to experience being a man, so I would probably chose a male. I have a special spot in my heart for Jared, even with all of his problems. I’d probably have to choose him. And he is my favourite...I think because he says all the things I am too shy to say, acts on his desires, is a bit reckless. I love him dearly even though I’ve screwed him up royally.


TKT: If Shadow Fox and it's sequels were to be picked up and made into a screenplay, who would your ideal actors be for the main characters?


AB: Just so happens...I may have given this question some thought. On occasion. All day.
Jared: Jonathan Rhys Meyers
Tarika: Olivia Wilde
Nathaniel: Ben Barnes
TKT: You’ve been nominated for a Novel of the Year award by our publisher’s.  That’s quite a big deal, especially for a first-time published writer.  You want to make a practice “speech” if you win?  Feel free.  Also, did you expect to be nominated?
AB: Last year, when the nominations came out, I thought, oh, wow. That would be so cool. And then I completely forgot about it. So when I got the nomination I was completely stunned. I really didn’t expect it, especially for, as you said, my first novel. And I’ve grown a lot as a writer since I wrote it, and so I see so much room for improvement. I keep thinking, really? You like me? You really like me? Winning would be great, obviously, but I’ve read a couple of the other nominations and I will be very happy for the winner. There’s some really tough competition (clears throat insinuatingly).
TKT: Haha!  I wonder who you could mean?  But, I know the feeling.  One last question.  Where do we find you on the web?
AB: My website is the best place: www.ashleyjbarnard.com and that has all the information and buy links on it.
Thanks for having me, TK!


You're very welcome Ashley, and it was a pleasure having you.  And now, I'll just disappear for a while since I'll be making a certain purchase to add to my collection of books by someone whose name sounds a lot like Ashley Barnard...
Posted by TK Toppin at 4/08/2011 06:00:00 am 11 comments: