January is coming ever-close to an end and my calendar for next month never looked so busy.  Who knew writing a book (or two) would fill up my days so much.  My fascination with looking at my computer and checking up on things is getting a tad obsessive.

To recap, I've scheduled some blog features for the coming months, where I'll play hostess to my fellow writers when they visit my site.  So stay tuned and meet some very talented and imaginative writers.

On the writing front itself, I'm neck-deep in self edits for the final book in the series, The Eternal Knot.  My personal deadline of submitting it before the month end is looking possible.  Even the first few days of February would be good.  So trying my best to polish it up nicely.

Today I'd like to introduce you to Allison Knight, a fellow Champagne Books author, and the first to kick off my author exchange features and interviews.  To get things started, Allison wanted to share with you why and how she got herself pulled in to writing historical fiction.
“One night, while the Earl of Sandwich was playing cards, he got hungry...” So began another dinnertime tale about people to whom my father swore we were related. With every story Dad told, he instilled a love of history in all of us. For example my sister has become a genealogist. But Dad wasn’t the only one. My grandfather delighted in gathering his grandchildren around him and telling us about his life; how the snow came through the cracks of their one room log cabin on the night he was born, why he never got further in school than third grade, although by all standards he was a very successful man.
Mother also had stories to tell.  Her tales centered around the antiques from relatives who journeyed to the US from Germany, Holland, even a bride from Spain who was supposed to have been a purchased bride. I have a rose bush that has traveled around the US with us which supposedly came with one of the relatives from Holland nearly two hundred years ago. Notice -- I said supposedly.
Of course, I'm also a romantic. I have to have a story with a happy ending. Yeh, I really like those fairy tales which have 'and they lived happily ever after' endings. So I write romance.
I also love delving into facts, researching a book. The valentine story, Roses For My Lady, released this February, came about when I followed the development of the Valentine card which began in the 15th century. Some facts, however, have a nasty habit of alluding an author, no matter how many attempts are made to discover the truth. So, as an author, I get to imagine how it would have been. After all, it’s called fiction for a reason.
Sounds like a truly intriguing book!  Here's a look at the cover...beautiful! 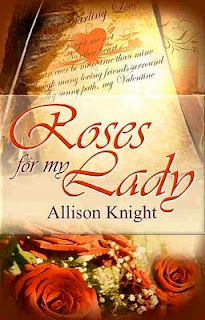 Award winning author, Allison Knight began her writing career like many other authors. She read a book she didn’t like and knew she could do a better job. She grabbed paper and typewriter (computers were not available back then) and announced she was going to write a book. Her children hooted with laughter.
“Yeh, Mom, when cows fly,” her daughter declared.
She took classes, joined a critique group and RWA, and wrote, rewrote and wrote some more. When her first book sold, she came home from her teaching job to find a stuffed toy cow rotating from the ceiling fan in the family room.
It seemed  - “Cows did fly!”
Since that time, Allison has written and published seventeen romances for both digital and NY publishers with a digital valentine novella coming out in February. Her current work is another medieval book from her 'song' series.
Because she loves to share her knowledge and her love of romance novels she often blogs with other authors. She also loves to talk about the growing digital market.
You can find her (and her impressive array of books) at:
www.AllisonKnight.com
www.AllisonKnight.blogspot.com
www.facebook.com/AuthorAllisonKnight
She blogs once a month for The Writers' Vineyard, http://thewritersvineyard.com

Thanks so much Allison for being my guest today.  And thanks to those who have stopped by to learn a little bit more about her.  Show her some love and post a comment.
Posted by TK Toppin at 1/18/2011 08:00:00 am 5 comments:

I'll Be Picking Grapes on Sunday

A quick few lines to say that this Sunday, check me out over at The Writer's Vineyard as I guest post onto their blog.  And if I read the instructions right, you'll be seeing me there at least once every month from now until infinity.

For my debut post, I talk a little bit about my life now as a writer.  So, click on over and check it out.  And become a follower to the blog - you won't be disappointed by the many writer's who contribute as they talk about various stuff that fills up a writer's existence.

So, I've hit the ground running, so to speak, and put my game-head on from early.  It doesn't matter it went a little blank last week with the announcement of my book of the year nomination.  It's allowed, right?  I mean, come on!

Okay, so to keep you in the loop, this year, I've scheduled several exchange interviews/featurettes from a variety of interesting and super-talented writers that I'm pretty sure you'll love to meet.  And so far, they're all from Champagne Books (amazing how much talent lives there).  I'd really love to find others interested in doing an exchange, and they don't necessarily have to be writers.  So anyone game, give me a shout.

I'm hoping to have at least one (maybe two) exchange features/interviews a month, for the rest of the year.  And yes, by exchange, that means you gotta have to on your site as well.  I'll try to be interesting and engaging.

You start each year with an optimistic grin, ready to take on the a brand new year and everything it throws at you.  What you don't expect, is to be grinning like a complete idiot that you look like a fool!

Such was the scenario when I opened my email late last night and spent the rest of the night grinning into oblivion.  My publisher had nominated my book, The Lancaster Rule, for Novel of the Year 2010 - and sent me this image to show off! 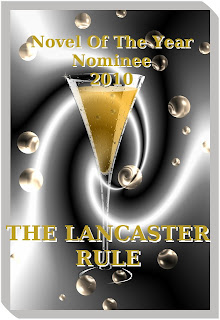 How sweet is that?!

So I won't know until April who the winner is, but I can honestly say that I'm in the running with some really outstanding books.  It may not seem like a big deal to some, but it is to me.  To be even considered is a big enough deal.  To be nominated, even bigger.  I would never have thought, three years ago, that I'd be grinning this idiotically while typing up these words, because the microdot bubble of a story idea that formed in my head was going to nominated for an award.

Well, that's all I got.  Just had to share it with you.

Amid scattered to heavy showers, everyone at 13ºN rang in 2011 at their various spots of revelry.  Me and hubby decided to stay in like we did last year and climb up onto our roof to watch the fireworks.  Of course, being on the roof of your house, when it's raining, with an umbrella each, in the dark...well, that's not quite recommended.  And as for fireworks, one hotel close by didn't have a display since their barge couldn't trek out in the choppy waters.  The other two, well, they were a bit far to see, but we did manage to see a few bright pops.  Some even looked like they'd gotten wet from the rain and exploded in a rather anemic way.

The next day, the hotel that didn't do the fireworks, scared the bejeebers out of us and blew down the neighbourhood with their usual impressive display.  WOW!  You can never tire of watching fireworks.  And they never last long enough, either.

As the new year began, not much has progressed in way of writing endeavours.  For the moment, that is.  With our houseguest still in-house, and much to do in way of social entertainment as people seem reluctant to give up the ghost of celebrations past, to sit down and get into the writing-mode is very distracting.  By next week, things will return to normal for me and I can get back down to business.

First up on the menu: Seriously getting through my self-edits for The Eternal Knot.  I'm this close to completing the edits and I'd like to get that done and over with as soon as I can.  After that, a re-read and some fine-tuning, and then...submitting again.  I'd like to have that done by mid-February - latest!

After that, I can resume writing on one of two of the works in progress.  Depending on which moves me first.  Think that's why I couldn't seem to progress with them, the edits to the third book were still niggling in the back of my mind and getting me kerfuffled to distraction.  Hate having a mind sometimes that likes chronological order...well, order in general.

Right...but before I do any of that, I've got a few jobs to complete from my day job.  It sucks having bills to pay.