Well, it's finally here.  The end of the year.  It's come way too quickly - it always does as you get older.

Thought I should do a last post for the year to wish all the very best, and maybe a quick reminder that my blog name will be changing on January 6th.

So, to all my readers, I wish you all good things for 2012, with much good cheer, luck, success, and health.  My thanks for your following and my hope that you continue to read my idle ramblings into the new year.

January 6, my blog will be changing its name to tktoppin.blogspot.com.  So, a little reminder, to update your links. 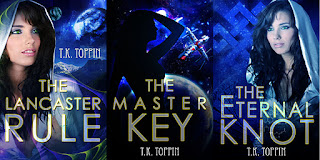 Time for another Science Fiction Fantasy Saturday!
Staying with The Eternal Knot, the final in the The Lancaster Rule trilogy, due out January 2012 Champagne Books and its new SFF dedicated imprint, Burst Books.
Last week, we encountered Josie and Loeb after her crash. Today, I thought I'd share a little bit about the crash.

What she didn’t take into account were the hard tree trunks and branches that catapulted her from one tree to the next like a violent game of pinball. Cocooned and relatively safe in her cockpit after the first impact, and a finger near the eject button, she endured the last jarring crash and rolled end over end across the forest floor.
She really did need to learn how to land and made a conscious promise to herself to do so...if she ever survived.
When her world righted itself and she hacked away the surround-gel with her krima, Josie kicked the battered door away, crawled out, and promptly threw up.

If you're interested in participating in next week's SFF Saturday, stop by their sign-up blog which is open every Wednesdays.  And don't forget to follow the rules.
Cheers!
Posted by TK Toppin at 12/16/2011 10:47:00 pm 12 comments:

The Last Few Weeks of December 2011

So, the year's nearly done, and as it stands, I look forward to the new year with much anticipation and expectation than I've ever done in the past.  As year's go, it's been a fairly poopy year for me and my surrounding satellites.  The pitfalls have ranged from sluggish work, additional expenses, sick friends and family, and close friends that have passed away.  Despite that, there has been some really high points, including the release of my second book, The Master Key, escapes from reality in the form of travels, and just chilling with those that mean the most to you.

But I'd still like the see the back of 2011, preferably with a foot up its crevice for good measure.

Next year is the Year of the Dragon, touted for its grand festivities and bountiful lucky charms shooting out in every direction.  I'm hoping to catch some of those charms and hitch a ride.  At least I'll be starting the year right.  Early January will be the release of my final book in the trilogy, The Eternal Knot.  Yes!  I feel like I've accomplished something.  While having one book out is amazing enough, and incredibly lucky, having the trilogy complete and out is like the final stroke across your 't', the full stop after the word.  The story is complete.

I have three more tales to tell, one complete and undergoing some "rearranging" and fattening up.  This is called Bengaria's War, and so far, I've received some very positive remarks from my beta readers.  Thank you!  As to what I'm going to be doing with it, I'm not quite sure yet.  It's far from finished, even though it is.  The other is To Catch A Marlin, a futuristic detective tale with a very engaging baddie.  While this is still stuck in second gear, I know how to proceed with it and hopefully, by mid-year, it will be complete.  Finally, there's The Grosjean Chronicles.  This has given me endless trouble with many plot changes.  I began this on the heels of finishing the Lancaster Trilogy, and I think what stalled me was that I was trying too hard to make it LIKE the Lancaster tale.  Probably too much.  So, I had to redo quite a bit.  It's now starting to take shape, including the plot line, which is a little bit better.  This is another tale I'd like to complete, and I think sometime around September, I may be done with it.

Well, that's it writing-wise for my new year plans.

In other plans, my blog site will have a new name from January 6th.  So get ready, if you're a follower, to change the link to tktoppin.blogspot.com

That's it for now. I'll make a final posting before the end of the year...I'll be away enjoying my first cold Christmas, which I look forward to with pleasure!

Time for another Science Fiction Fantasy Saturday!
Staying with The Eternal Knot, the final in the The Lancaster Rule trilogy, due out January 2012 Champagne Books and its new SFF dedicated imprint, Burst Books.
Today, Josie has crash-landed her "car" and her aide, Loeb, has intercepted her for retrieval...much to her chagrin.

“Madam,” Loeb nodded, calm and collected as if it were another normal day at the office. He looked immaculately clean despite the sticky heat. “Your Snare Gun is holstered and your krima is still disengaged. In any event, the jacket around your waist would have hampered your movements by at least one second--enough time for me to elude you. Are you all right? I saw the crash site, I wondered if…”

“I’m fine.” Josie propped on one leg and studied the aide. “How did you get here?”
“I followed the road,” he replied matter-of-factly and waved vaguely behind him. “Madam, we should head back. I was pursued by an unidentified vehicle--lost it just before you dropped out of sight and into those trees,” he pointed to his left. “It won’t take them long to pinpoint our location.”
Ignoring his suggestion, she gaped. “You took the road? There’s a road?”

If you're interested in participating in next week's SFF Saturday, stop by their sign-up blog which is open every Wednesdays.  And don't forget to follow the rules.
Cheers!
Posted by TK Toppin at 12/09/2011 10:54:00 pm 10 comments:

Stop by Holly Hunt's site today at Rhythm Poets, where she hosts Monday Madness.  Today, I'm the lucky girl suffering from the madness.  Featuring my upcoming release, The Eternal Knot, it includes a short excerpt and little useless information about myself.  So stop by, leave a comment and show me some lurve.
Posted by TK Toppin at 12/05/2011 08:53:00 am 2 comments:

Time for another Science Fiction Fantasy Saturday!
Staying with The Eternal Knot, the final in the The Lancaster Rule trilogy, due out January 2012 Champagne Books and its new SFF dedicated imprint, Burst Books.

Today, Josie, from her POV, reflects on her life so far...

Living in this future was very hard work, and to date, I hadn’t had much time to wind down and appreciate it. Having your life threatened--constantly--and living on the edge, really took a toll on you. And I still hadn’t seen all the new wonders that this future had to offer. There still was so much I wanted to do and see, but trying to stay alive took priority.

But I did manage to strike one major thing off my ‘to do’ list. I’d gone into outer space.
And as if staying alive were not hard enough, I still had official duties to perform. Some days, I really wished I hadn’t helped my father out by stepping into that stasis machine. Being the president’s wife was a royal pain in the ass at times.

If you're interested in participating in next week's SFF Saturday, stop by their sign-up blog which is open every Wednesdays.  And don't forget to follow the rules.
Cheers!
Posted by TK Toppin at 12/02/2011 11:45:00 pm 7 comments: