I'm so behind in blog posts! Also, do people still read blogs?
Anyway, quick catch up. Mostly the two releases I had this year. The first one is Grosjean, a sci-fi romp with a space pirate everyone thought to be dead. This book was stewing and simmering for a very long time! Since 2011, the seeds of this book started on the heels of me completing The Lancaster Trilogy, and at first, I wanted it to be a sequel to the trilogy. But that didn't happen. I did keep some elements of the Lancaster world, in small, tucked away mentions, but Grosjean is a story all of its own!
Then, months later, we have Raq. This is another story that I've been working on, since 2012. Raq originally came out as a short story in an anthology collection called, Slayers. But I'd always wanted to make this into a full-length. For many years, I picked it up, then put it down. I honestly didn't know where or which direction to take with the story. But slowly, the framework started to take shape, and I ploughed on, moulding it to what it is now. I am thoroughly pleased with the way it turned out. Raq is unlike most of my books, where the action and thrills are visceral and wild. This book is a more introspective, philosophical and character-driven story.
What's next for me? I'm currently working on finalising a new story, called The Dark Without. I think you'll like that one too.
Cheers for now!
Posted by TK Toppin at 10/03/2022 11:42:00 am No comments:


Finally out, after nine years, the series is complete!

Available only on Amazon (or the Amazon specific to your country).

BENGARIA'S WAR is Out At Last! 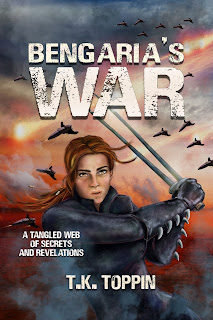 The seeds of this story actually started Christmas 2011, but it wasn't until the following year that I decided it needed to be written. After many drafts, oh, let's round it off at seven...or was it eight, and many beta reads and edits, even a couple of rewrites, Bengaria's War finally came together into something I was happy with, my editor was happy with, and hopefully, my readers are happy with.

After eight years, it is now released for all the world to see. To say it's been a frustrating, sometimes depressing ordeal getting this particular book together is an understatement. I have fought many internal battles trying to convince myself that this book was worth all the effort, and financial resources, I had put into it. Many times I'd considered shelving it altogether. But at the back of my mind, I knew it needed more, it needed finishing. And by finishing, it meant an overhaul, a thorough polishing, and scrapping out all the unnecessary bits (akin to cleaving out bits of your soul). I am now finally happy with the results, and I could not have done it without my editor, Laurel. She get's me. She get's my writing. And she is amazing to work with. Thank you so much! And of course, my formatter, Write into Print. The amazing Stef wields magicky stuff to create shiny, professional ebook and paperback files, giving my books the proper spa treatments it needs to shine. Thank you!

To my readers, enjoy! 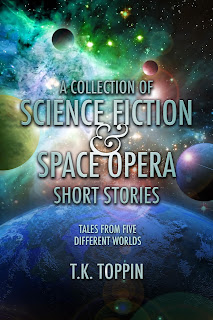 Like most writers, I have a slush pile of countless story ideas and half-written attempts of many new stories. A great deal of them, end up being redirect as shorts or bits of flash fiction (which I'm still sorting through). This short story collection contains works from 2012 to 2019. A few were destined to be great big novels that had been altered and pared down until it ended up being a short story. Others were created for the sole purpose of being included in other short story anthologies (only one made it). While it's only five tales, they are each unique in their own right, taking you to a different setting and world.
Available exclusively on Amazon Kindle.
Posted by TK Toppin at 12/16/2019 12:10:00 pm No comments: