Well, I'm back.
After a short break (and a little holiday) I'm back on board with the SFFSat snippets.

SFFSat is a place where a bunch of us post snippets from our written works and also shoot the breeze a little. And before I get ahead of myself, thanks and appreciation as always to those who stop by and leave fantastic comments.

This week, I'm posting a snippet from To Catch A Marlin, a more or less finalized WIP due out this October with Ring of Fire Publishing. A futuristic cat and mouse tale involving Special Inspector Pedroni and the vigilante Jax Marlin, who just happens to be a super sexy woman with ninja skills.

Today, we have the very first opening lines to the story...

“Pedroni!”
Special Inspector Michael Pedroni peered up from writing his report to find Chief Inspector Aoki briskly walking towards his desk. The CI looked irritated, which meant something crawled up his aft orifice and laid eggs—and now he was about to hatch them all over Pedroni.
CI Aoki dropped a memory sphere and a flimsy report folder on Pedroni’s desk. “The El Sayed case, it’s yours with an upgrade.”
Pedroni narrowed his eyes. “The kidnapping case—I thought that was Boucher’s.”
“Well the ever-efficient Boucher decided he’d rather have a burst appendix.” Aoki fussed with his tie, a favored habit when something bothered him. “Bulletin on the case, it’s no longer a kidnapping.”

Well, it's that time again...vacation time.

This year, we're rolling out a little later than normal, opting instead to not head north but sideways to Grenada, the Spice Isle (and really, it does smell like spices from the moment you step out the airplane. The air permeates with the zingy smell of nutmegs and cinnamon and all sorts of yummy spices). 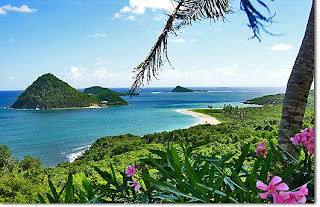 It's been a few years since both my hubby and I have gone there. In recent times, I've accompanied the mother-in-law so she could attend to errands (she's Grenadian) and I acted as chauffeur (plus, my work schedule allows me to just drop things and go). I have to admit, the island simply feels like an extension of home, having been there numerous times before.

This year, hubby is happily stepping up for the chauffeuring detail as well as a week of nothingness. And I mean nothingness. Grenada is the perfect place to vegetate and bask in the nothingness. He's already taken out his fishing rod (our hotel has a private jetty that has seen many days and nights in the past of fishing time) and checked all his hooks and weights and lines and whatnots. Meanwhiles, I've got all the electronics sorted, included the adaptor for the power (they use funny plugs and a different voltage) and I'm looking forward to some writing time...well, if the inspiration hits me.

So, come Friday, and forty-five minutes of flying time later, we'll be vegetating and breathing in salty-air for a week. Hopefully, if we can revive ourselves, we'll be returning to the real world ready to tackle stuff, and our battery levels reading fully charged!