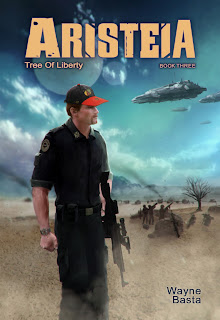 Zeric Dustlighter has been a soldier his entire adult life. Give him a gun, and tell him who to shoot, and he’ll get the job done. He always knew he was never cut out to be in command.

But now, cut off and trapped behind enemy lines, Zeric faces his worst nightmare; the fate of thousands of lives and possibly the en- tire Union, rest with his decisions.

June 15 saw the release of ARISTEIA - Tree of Liberty by Wayne Basta.

Wayne is also hosting a contest over at his website and giving away some 'free stuff.' Click HERE to check out what they are!


“Tree of Liberty is a thoroughly enjoyable finish to this sweeping, epic trilogy. It’s got everything we’ve come to expect from Basta: triumph over adversity, personal sacrifice, emotional connections and thrilling action. Another great space adventure!”
— Jason Kristopher, author of The Dying of the Light: Interval

Excerpt
The explosion shattered the window above Zeric’s head. Oops, he thought. That hadn’t been intended. In the distance, he could just make out the light from the fire started by the explosion.
“Looks like Gu’od made his delivery,” Zeric commented to the Terran boy beside him.
Kumus Stryker smiled, “You said he wouldn’t disappoint, General.”
The reverence with which Kumus said his title still made Zeric uncomfortable. Despite having been a general for
more than two months, and most of that time in command of the stranded Union Army on Sulas, he still hated it. To be fair, Kumus had acted the same way when the boy had been his aid back on Enro.


Wayne currently lives in Houston with his wife, son and their dog. He remains a fan of geek culture, board games, video games, fantasy, science fiction and all around silliness.

Where to find Wayne: