Today I have part one of my interview with JC Cassels.  She is such a riot so I had to split my interview into two.  Not only that, coming out April 20, her debut novel from The Black Wing Chronicles: Sovran's Pawn.

And GUESS WHAT?  JC was generous enough to include an EBOOK giveaway for one lucky person who comments in today's posting. 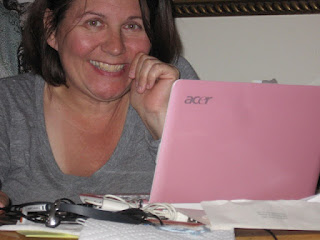 Tell us a little about yourself – who you are, what you write, and why you write:
My name is JC Cassels, American by birth, Southerner by the grace of God. There’s a long-standing tradition of writing and storytelling in my family, as in most old Southern families. The four predominant careers in my family have been politician, teacher, entrepreneur or writer. Writing was the only one of those that held any appeal for me. Early in my career I was a freelancer for newspapers and magazines. I write stories about my imaginary friends because it gives us an excuse to continue to hang out. They happen to be space pirates and interstellar men of mystery. Naturally, that makes my genre space opera. I’m a romantic, so I put the boy/girl mushy stuff in there to keep things interesting.
Gotta have a little romance, right?  So, would you ever write in another genre?
Absolutely! I have dabbled in Historical Romance, Thriller, Southern Humor and YA/Mystery. Perhaps someday I will publish them. 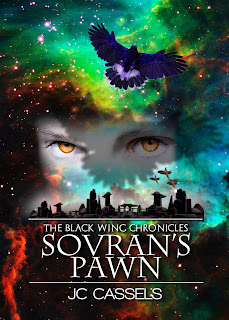 Do you have a recent release, or, what are you currently working on?
My first novel, SOVRAN’S PAWN, Book One of THE BLACK WING CHRONICLES is due out in e-book on April 20. It’s a space opera with some romantic elements. It’s the first in a series of books that tells the story of a power struggle between two Overlords and the star-crossed lovers caught in the middle.
I am also working on a companion series called THE MERCENARY ADVENTURES OF BLADE DEVON which picks up after Book Two of THE BLACK WING CHRONICLES in which Blade leaves his day job to join a team of mercenaries. This series is obviously more swashbuckling action/adventure and less romance. The first book in this series is ARCANA DOUBLE CROSS. This book contains a scene in which Blade holds the blade of a knife clenched between his teeth while he literally swings in to the rescue on a rope, or reasonable facsimile thereof. It will likely be published in the fall.
That sounds so exciting.  And, wow!! I'm just looking at the cover art.
Okay, so what inspired you to start writing?
My school library ran out of books… actually, I ran out of books to read in my school library. We had a small media center and once I blazed through all the fiction, my mother took me to our small local public library and I did the same thing. So, I turned to writing just so I would have something to read that interested me. As a child my reward for good behavior, good grades, compensation for hours in a dentist’s chair, etc., was a new book. I got a LOT of new books. I had the complete Bobbsey Twins series and was well-represented in Nancy Drew.

Finally, where can we find you lurking?
Find me on Facebook https://www.facebook.com/pages/JC-Cassels/131216176902032
Check out my blog http://jccassels.wordpress.com/
Follow me on Twitter twitter.com/calicoco468
Goodreads http://www.goodreads.com/user/show/6523498-jc-cassels
On Smashwords https://www.smashwords.com/profile/view/calicoco
Now here's a little bio on JC...
JC Cassels, a native of Tampa, Florida, traces her lifelong fascination with SF/Adventure to watching Star Trek on a tiny black and white portable television aboard the family boat as a child. The Space Opera trend that followed the release of Star Wars fed an obsessive need for swashbuckling adventure set in deep space. Today, JC feeds that need by writing her own adventures, heavily inspired by 1960's television adventure shows like Star Trek, Mission: Impossible, and Wild Wild West and fueled by Firefly reruns.


When not writing in her haunted hospital, JC lives with her husband, three children, five dogs, fourteen chickens and a horse in a century-old house in a tiny rural community, and enjoys spending her free time sewing, camping, and heckling theoretical physicists on the Science Channel.
-----
SOVRAN’S PAWN blurb:
BO BARRON is the pawn in two Sovrans’ struggle for power. As the Chief of Barron Clan she commands the Black Wing, a strategic asset crucial to the balance of power in a Commonwealth in contention. That’s the reason she was falsely convicted of treason and sentenced to be executed. Instead of letting her meekly go to her death, Bo’s people risk all-out war by breaking her out and smuggling her into hiding. It’s what they do. They’re pirates at heart.

But if she can’t be killed, she can be manipulated. How? By kidnapping her father. If Bo wants him back she has to take on a false name and steal the schematics for a phase weapon being auctioned off to the Sub-socia at a Five Point tournament.
BLADE DEVON knows all about false names. He has more than his share. As Darien Roarke, he’s a well-known Five-Point player. If Blade is willing to use his alter ego to retrieve those schematics, the Inner Circle is willing to overlook the fact that he’s technically a deserter.
A botched assassination under the guise of a bar brawl leaves Bo blind and Blade wondering if there isn’t more to this job than he was led to believe. Never able to resist playing the hero, Blade tends her injuries and delves deeper into the intrigue only to find this mission isn’t about a weapon at all.
The catch is, no one and nothing are what they seem…
------
Well, many thanks to JC for stopping by today for Part 1 of her interview.  Next week, April 23, I'll ask her some fun questions...let's hope she's game enough to answer them!
Now, don't forget about the giveaway so show her some love and leave some flattering comments...she might pick YOU!!  Good luck!!