In a Den of Books

Wow.  I'm impressed.  I never had so many visits to this page until my guest K.M. Tolan dropped by to download what he carries around in his head.  He must be famous or something...  I even got two new followers!  Hi!!  *cyber waves*  Oh, but never mind, let's not dwell on Tolan's brain activity and what he conjures up in there.  Let's get back to me already!

So I started this week like I start all Mondays.  Groaning and bitching that the weekend was over, and then groaning and bitching as I waded through my emails and various other online commitments.  But, it wasn't going to last very long because I had to quickly get my game-head on and drop by a small bookstore to see if they were serious about wanting to sell my books.  And, well, since I'm posting here, the answer was YES!

My books can now be found locally (here at 13ºN a.k.a. Barbados) at The Book Den.  A small bookstore for used and new books with a loyal following of ardent readers.  Tucked away, all on its lonesome, my book... 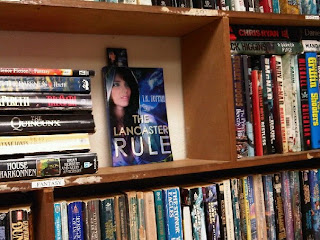 Tell me it doesn't look pitifully lonely.  It's practically begging you to take it home with you so it can sit amongst your other favourite books, to be loved and cherished like a good friend.

March trundles toward its finish in just under a week and April and Easter and all those chocolate cream eggs approaches.  Oopsy...going off track there.  Okay, April I have lined up an exchange interview with Ashley J. Barnard.  Her sequel to the amazing Shadow Fox called Fox Rising is also due out for release this April.  Join me as I ask her some questions to gain a little insight into her fantasy world and her engaging characters.  April also finds me with another review for The Lancaster Rule...eeee!  Let's hope it's another good one and my nails won't be affected too much by my gnawing teeth.  Also coming up, another blog post from me over at The Writer's Vineyard, so stay tuned to that.  On top of all that, the winner for Novel of the Year will be announced April 19th as well.  And if you didn't know, well, I'm in the running for that, along with some very talented writers, including Ashley Barnard, Ciara Gold, K.M. Tolan (hmm, there he is again), Nan Arnold, and Michael Davis.  Okay, I feel intimidated being surrounded by all of them...maybe I'll just find a rock to burrow under until it's over.

Right, time to shut up for the time being.  Working on my latest WIP (work in progress), The Grosjean Chronicles.  Have to say, it had been slow going at first, where it wandered and wavered a bit, and then I had to stop to review the last book in the trilogy.  But now, I'm back on track and it seems to be heading in a different direction altogether.  Not a bad direction, but one I didn't foresee.  Ah, wells.  Sometimes the book just takes a life of its own.