Today I have with me K.M. Tolan, fellow Champagne Books author who writes space opera/sci-fi.

Having read all four award-winning titles with Champagne Books, I can honestly say that his Dancer series have literally swept me away.  Not only was I transported into another world, entirely made up in Tolan's head with such exacting care and detail, but I've also discovered a new multi-layered culture, a new swear word - itsa! - and a new, amazing and in-depth protagonist that goes by the name of Mikial.  What more could you ask for in a sci-fi book that goes by the sub-genre of space opera.  Operatic, indeed!  I am waiting patiently for his fourth Dancer book, Battle Dancer.

When I asked Tolan to be my guest today, I specifically wanted to know how he went about creating his amazing world of Dessa...and why.  Dessa, for those who don't know, is Tolan's planet where the story of Mikial Haran, a kick-ass Dathia warrior, takes place.  In place is a working social structure, complete with laws, beliefs, hierarchy, and customs - a perfect background for Mikial's story to unfold.

Here's what K.M had to say:

First off, I did a lot of reading in my childhood.  I consumed the works of many old masters – Norton, Heinlein, and later such wonderful world builders such as Julian May and JRR Tolkien.  Both Julian May (The Many Colored Land) and Zenna Henderson (The People) also showed me the value of well-written characters, as had Orson Scott Card (Ender’s Game).  I also went through a lot of science books on insects, paleontology, astronomy, and archeology.  Don’t ask me why, but I found them fascinating.

The rest I leave up to a logical “if this then that” thought process gradually layered through many years of excessive compulsive daydreaming.

Blade Dancer was drawn from what at first was a fantasy in my head influenced by Andrea Norton’s “Witch World” series.  Earth, Water, Fire, Air – the four elements seemed a great way to start a culture based on magic.  When I got serious about writing a novel, however, the market was saturated with fantasy stories.  So, I proceeded to turn my old shelved ideas into a more practical science-based world, and the fun began.  I even made an elaborate notebook for reference.

The four sub-species or “sects” in Blade Dancer grew out of my idea of those elemental powers.  Evolution had to dictate, however, not magic, and so the “if this then that” ball got rolling.  First, the only reason you would have separate abilities was if each sub-species was biologically specialized – so they had to look different based on what they did.  The only “powers” available in nature is electricity.  So what if humanoids were endowed with glands similar to that of an electric eel?  The bioelectric basis for my culture spawned off an electrically based technology and even the planet’s location inside a nebula’s charged environment. 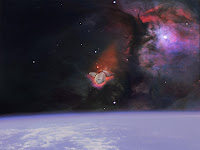 Tolan's impression of Dessa
Little of the initial elemental fantasy remains, though you will see the Ipper still in love with water and the Cothra working with the earth.  Instead, I looked at what I felt was important to a society – workers, communications, physicians, and warriors.  The sects had to be in a symbiosis with each other, which also meant the race as a whole would be far more social than we humans.  This, in turn, brought up cultural insights based on race.  To these people, race is everything, not something to be set aside for a greater equality.  The four sub-species would intermarry without hesitation, but biological specialization would place dictates on a person’s future we humans would find both racist and intolerable.  A socialist government that might not work at all here on Earth would thrive with such a people.  Since biological specialization was the order, it was not unreasonable to expect even further specialization in the creation of their leaders. 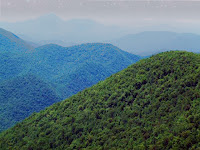 Qurl Hills
With each layer of complexity came an opportunity to embellish the culture – and culture was an important detail to me as it both immerses a reader into an alien world and shaped the characters within it.  Let me give you just one example of cause-and-effect.  Reproduction – you can’t get more basic than that when it comes to a society.  So, I start with the biological “rules”.  My race’s females had to be different, so why not put them into “heat” so to speak?  Say, twice a year for about two weeks.  They call it their Passion.  Like most animals in nature, scent is used to communicate a female’s state of sexual readiness.  If a male doesn’t get a whiff, he’s not interested in sex any more than she is.

Wow, does this start knocking down dominoes.  First, with females being the instigators, you end up with a society with stronger equality between the sexes.  Especially when males and females are not distracted by sexual urges most of the time.  The girls are not going to completely ignore eligible males when out of Passion either, so the ladies have to figure other ways to get attention.  Suddenly, dancing is a serious business in this culture for both the guys and girls.  There are ranks, different styles, and various dance patterns.  Competition takes place on the dance floor, and in a socialist society will be regimented with dance halls in every neighborhood.

Morality takes a left turn as well compared to, say, Western Judeo-Christian values.  It is much more difficult to devalue sex when it is the female calling the shots.  Of course you can’t have her perfuming the streets and disrupting every male around her, so inns will have special rooms and there is this flower whose powdered petals effectively mask her scent.  Aiel necklaces are the result, and this jewelry itself becomes a custom, an extra visual signal of a female’s readiness that includes “promise beads” to hang below some lucky male’s gift to her down at the inn.  Belts are worn in particular ways to indicate if a girl has entered a relationship and should not be approached.  Instead of bar fights over who gets the girl, there are Challenge dances.  One aspect of biology spawns off a myriad of cultural details.

Characters almost write themselves when you set them into a rich culture.  Mikial, for example.  She is the one you follow through the Blade Dancer series.  She is “Dathia” – one of the rare females in the predominantly Datha male warrior sect.  Nature made her for a purpose, so she has all the lethal equipment you would expect for a biologically specialized species.  She also has all the insecurities of being so large and feral, and envies her willowy Ipper girlfriend.  So, Mikial excels at dancing to compensate for her looks, masters her combat training in order to appease a demanding Datha father, and is late for her first Passion.  Enough teenage angst to, well, write a book about. 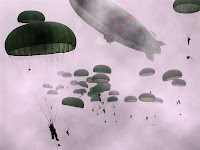 Datha troops parachuting from their dirigible
Tolan has the ability to write like an invisible storyteller so you can't help but fall into Mikial's head and see the world through her eyes.  With so much battle tactics and tech jargon thrown into the story, I suppose the temptation to make the lead character male, might have been great.  But Tolan manages to switch it around, jazzing it up with dress style mentions, eyeballing prospective suitors, and the usual female image insecurity issues to create a well-rounded story from the perspective of a young woman who just happens to be born into a warrior sect.


Mikial’s origins come from the wandering mind of a nineteen year old male...probably enough said there.  A liberal dose of maturity, along with twenty some-odd years of marriage, helped turn her into an actual character with depth.  With so few female protagonists in SF at the time, I felt it was a smart marketing move as well.  She became this very large soldier type to help mask my male leanings, and that worked too.  The only negative aspect of all this is that I made her both alien and very prejudiced against humans - the latter trait becoming a weakness she stumbles over in Rogue Dancer and still has issues with.  This makes for a wonderful character who is both unique and flawed.